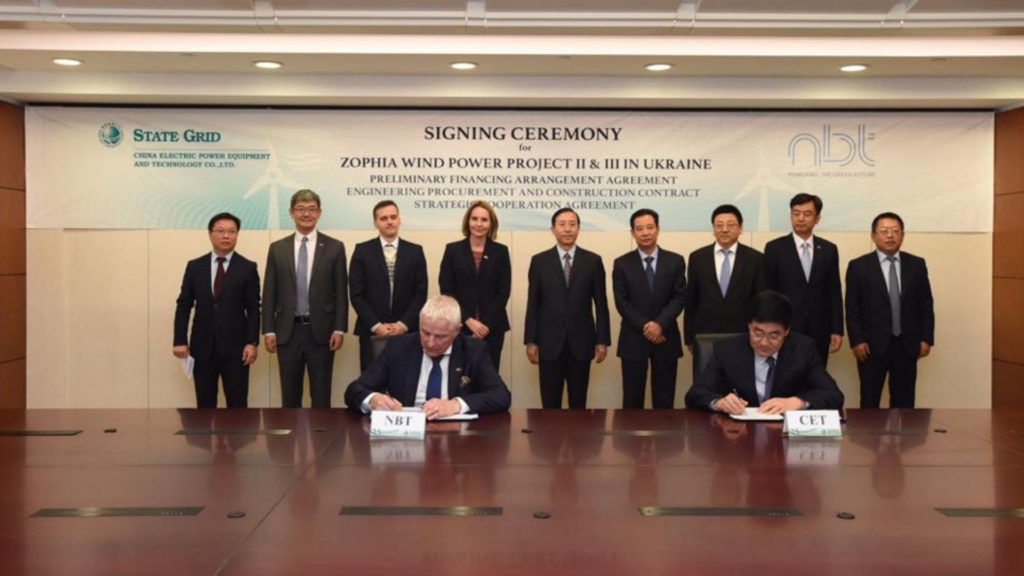 NBT AS, a utility-scale wind power developer based in Oslo and China Electric Power Equipment and Technology Co., Ltd. (CET), the EPC subsidiary of State Grid Corporation of China, have signed two EPC contracts for building a 750 MW wind farm in Ukraine.

Located in the Zaporizhia region of Ukraine, the Zophia Wind Farm will be built in two phases – 300 MW Zophia II and 450 MW Zophia III. Once completed, it will be Europe’s largest onshore wind farm.

NBT and CET also signed a Strategic Cooperation Agreement to cooperate on a global basis on future renewable energy projects.

Total investment for the Zophia wind farms will exceed €1 billion which is equal to approximately 1% of the gross domestic product (GDP) of Ukraine.

The signing ceremony held in Beijing at State Grid Corporation of China’s corporate headquarters was witnessed by the Ambassador of the Royal Norwegian Embassy in China, Ms. Signe Brudeset, First Secretary of the Embassy of Ukraine to the People’s Republic of China, Mr. Oleh Malyi, Mr. Liu Jianchang from ICBC, Mr. Bai Huafeng from Exim Bank of China, Mr. Wu Powei from CCB and the senior leadership of State Grid Corporation of China.

NBT is building on the success of its 250MW Syvash Wind Farm which achieved the first international financial close for €262 million of project financing for a wind farm of that scale in Ukraine in early 2019.

With the support of €500 million of senior debt provided by ICBC, Exim Bank of China and CCB, NBT has a plan to engage additional international banks into the bank syndicate for another €250 million of project financing and aims for an even larger financial close for Zophia.

The Zophia wind farms will be built to very high international standards, conforming to EBRD Performance Standards and Equator Principles. The electricity generated from Zophia will be sold to state-owned company Guaranteed Buyer State Enterprise – Ukraine’s wholesale electricity market operator. Once the whole Zophia Wind Farm is completed, it will have a planned production of 2,900 GWh per year and generate enough electricity to power the needs of approximately 340,000 households. The Zophia wind farms are expected to reduce CO2 emissions by 1,600,000 tons per year and make a substantial positive impact on the environment.

The Zophia wind farm will bring significant economic development and tax revenues to the Zaporizhia region, provide up to two thousand jobs during construction and have a lasting economic impact even after its construction is completed.

We are excited to sign the EPC contracts with CET for the largest onshore wind project in Europe. We are very happy to work with CET and State Grid Corporation of China to build a huge wind farm in Ukraine that will benefit the people of Ukraine and the environment. We also would like to thank ICBC, Exim Bank of China and China Construction Bank for their support and look forward to working closely with them to finance our Zophia wind farms.

We are very eager to work with NBT to build the 750MW Zophia wind farms. Since Ukraine is in the Belt and Road Initiative, we are delighted that we can enter Ukraine with this large construction project. With our strengths in international EPC projects, project management, technology, building world class transmission lines including ultra-high voltage transmission lines, we will bring unparalleled excellence to successfully complete the Zophia wind farms. We are thrilled to enter the Ukrainian market and hope to conduct more business such as helping the Government of Ukraine upgrade its grid infrastructure and building more top-notch power projects.